In the State of the Union Address on January 20th, President Obama spoke about the agreement between China that the United States to strengthen cooperation on climate pollution reduction and the development of clean energy: “In Beijing, we made an historic announcement—the United States will double the pace at which we cut carbon pollution, and China committed, for the first time, to limiting their emissions” (Yglesias 2015). In this historic announcement, President Obama announced that the U.S. will cut climate pollution 26-28% by 2025 and President Xi Jingping announced China’s targets to peak CO2 emissions by 2030 (Office of the Press Secretary).

A popular worldview among those working on international environmental treaties, such as the one the U.S. and China are committed to, is sustainable development. The goal of sustainable development is to meet the needs of the present generation without compromising the ability of future generations to meet their own needs (Smith 2009, 29). Sustainable development can only occur through new, more globally oriented political participation, focusing more on the global community than on the nation-states. This is exactly what is happening with the new cooperation between the U.S. and China. Together the U.S. and China account for over one-third of global greenhouse gas emissions (Office of the Press Secretary), “and because the world’s two largest economies came together,” President Obama says “other nations are now stepping up, and offering hope that, this year, the world will finally reach an agreement to protect the one planet we’ve got” (Yglesias 2015). The hope is that the agreement between China and the United States will inspire other nations to get involved at the U.N. Climate Change Conference being held in Paris this year.

This announcement marks the first time China has agreed to peak its CO2 emissions. Critics claim that China may be merely creating the illusion of environmental protection, and because the bulk of international regulations are without strict compliance mechanisms, China will be able to take the high road as a leader among developing nations with respect to environmental protection without having to significantly reduce pollution (Smith 2009, 267). However, Chinese Vice Premier Zhang Gaoli at the U.N. Climate Summit in New York on September 23rd said: “Responding to climate change is what China needs to do to attain sustainable development at home,” and he went on to say “all countries need to follow the path of green- and low-carbon development that suits their national conditions” (Freedman 2014).

Though China recognizes that sustainable development is a priority they point out that there is not a one-size-fits-all path (or timeline) to achieving sustainable goals. China faces a set of obstacles that preclude them from peaking CO2 emissions before 2030. Such as, the Chinese are forced to not only deal with the physical effects of years of industrial pollution, but they must also overcome the reluctance of officials and factory managers to take the consequences of pollution seriously (Smith 2009, 265). This does not mean, however, that they will not follow through with the agreement that they have just made. In fact, The United States is confident that China will succeed in peaking its emissions even before 2030 based on its broad economic reform program, plans to address air pollution, and implementation of President Xi’s call for an energy revolution (Office of the Press Secretary).

In conclusion, it is clear that in advanced economies perpetual growth is what is causing enormous environmental problems. The idea of sustainable development understands that we need economic prosperity, but at the same time we must recognize our limits and ensure distributive justice (Smith 2009, 29). Figures published last week show that in 2014 China’s GDP expanded by 7.4%, which was the weakest rate of growth since 1990. Xi Jinping calls this the “new normal,” and under the “new normal” officials say that China’s economy will be fairer and more sustainable, and that the country can finally begin making progress towards restoring its environment after decades of pollution (Kaiman 2015). It is clear then that China is already moving from a policy of unfettered growth to a policy of sustainable development. 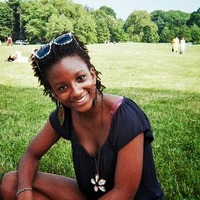 I am a student at Davidson College, class of 2016. I am a Political Science major with a minor in Environmental Studies. My academic interests are urban agriculture and food justice, environmental policy, and social entrepreneurship.